In An Unkindness of Ghosts, Rivers Solomon crafted a world centered around a young scientist named, Aster Grey. She lives on a multi-level spacecraft called HSS Matilda, in a society that functions like the American South, pre-Civil War. Amidst the systemic violence that occurs between the ships’ leadership and the lowdeck residents, Aster struggles to understand her deceased mother, Lune Grey. Grey is believed to have killed herself shortly after Aster was born. What Aster learned in her attempts to find her mother in the work she left behind was a way to change the course of her life and the lives of those around her.

If the synopsis doesn’t pull you in, take a look at the stunning cover. Absolutely captivating.

What I love the most about An Unkindness of Ghosts is that it’s so rich and complex. A person’s proximity to safety and wealth in the Matilda is not just dictated by the color of their skin, but their gender identity and expression, religious beliefs, and social relationships as well. Furthermore, the character relationships are full of angst and possibility. Aster is brilliant, but she knowingly struggles to express her affections towards her friends and family in a socially appropriate manner. As the reader, you have to navigate the tension between the importance of human connection and the dangers that are woven into the plot.

This book features a lot of science. (Yes, I know it’s a science fiction novel.) The level of detail speaks to Solomon’s ability to build a distinct world for her characters. However, sometimes I wasn’t sure what it all meant. This language was very much present in Lune’s journals. Even though Aster and Giselle, one of Aster’s closest friends, worked together to decipher Lune’s work, I had to re-read passages to keep up. Further, as the number of characters Aster interacted with increased, I had to remind myself a few times what her goal was so I didn’t become too invested in subplots.

Overall, I strongly recommend this book.

I’m excited that Whatever Happened to Interracial Love, a short story collection about race and love by Kathleen Collins, is the first book that I will feature on Storied Eats. This book is officially one of my favorites. Each story is rife with a longing that is unique to every character.

The collection’s title story, “Whatever Happened to Interracial Love” is one of my favorites. The reader follows a young interracial couple as they struggle to challenge Jim Crow and protect their relationship against societal pressures. Their parents are always present and struggling with balancing their children’s happiness and orchestrating opportunities for their children’s security.

“Togetherness came back in style. People got along for a while. Inside the melting pot.” — Kathleen Collins

The tension between parental expectations and reality appears a number of times in the book. As well as depictions of new and dying love, isolation, and self-discovery.

Whatever Happened to Interracial Love inspired me to bake Smitten Kitchen’s Double Chocolate Banana Bread. Though it took me a long time to choose a “flavor,” I knew I wanted to make bread because of its shareable quality. Very much like the experience of finding love. Adding cocoa and chocolate chips to the mix was a delightful twist. Similar to how Collins plays with the format of the stories. In fact, she brilliantly uses light as a narrator in “Exteriors.” 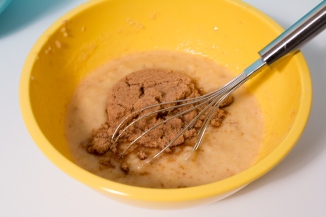